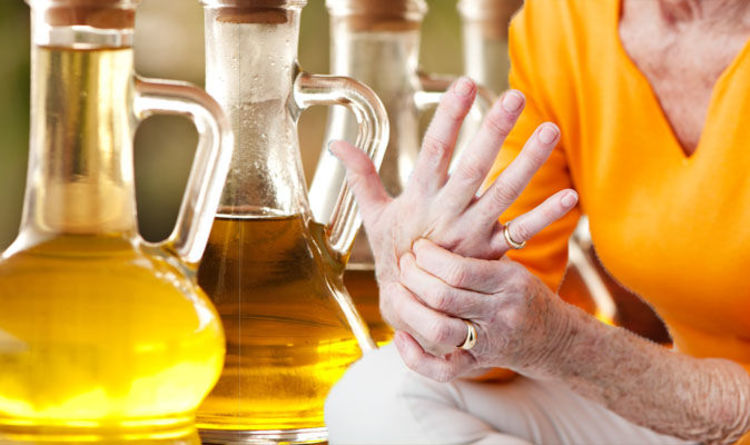 Arthritis symptoms include joint pain and inflammation, according to the NHS.

Painful symptoms of the condition could be relieved by taking two or three tablespoons daily of olive oil, it’s been revealed.

“It’s not the only oil with health benefits. Avocado and safflower oils have shown cholesterol-lowering properties, while walnut oil has 10 times the omega-3 that olive oil has.”

You shouldn’t heat the olive oil before taking it, as it could kill some of its beneficial properties, the Arthritis Foundation said.

Other foods that could help to relieve arthritis pain includes fish, nuts, fruits and vegetables.

Eating four ounces of fish, twice a week, could help to reduce inflammation in arthritis patients, studies have reported.

Salmon, tuna, sardines, herring and anchovies are the best types of fish for reducing arthritis symptoms, the Arthritis Foundation said.

About one and a half handfuls of nuts could also relieve some joint pain. Nuts have an anti-inflammatory effect, scientists have claimed.

Arthritis is a common condition that affects about 10 million people in the UK.

Osteoarthritis and rheumatoid arthritis are the two most common types of arthritis in the UK.

The most commonly affected joints are in the hands, spine, knees and hips, according to the NHS.

Keeping active could help to reduce and prevent arthritic pain, it added.