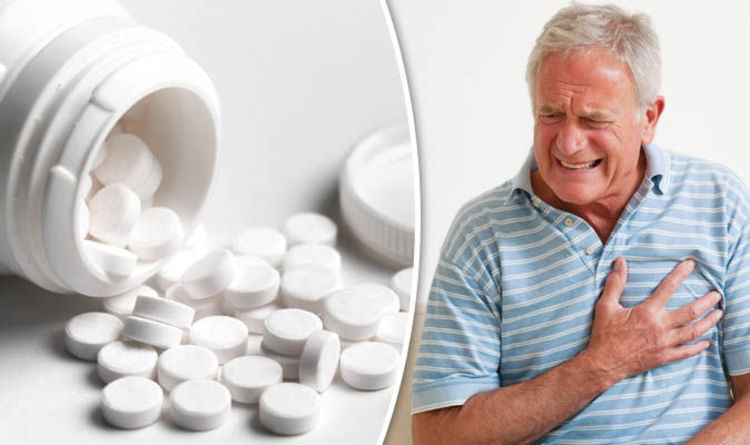 Scientists found the body can suffer a “rebound effect” following a sudden withdrawal – causing clots in vessels that supply the heart or brain.

The study shows how suddenly stopping the blood-thinning medication raises the risk of patients suffering a heart attack or stroke by 37 per cent.

Up to half of those prescribed aspirin take it upon themselves to suddenly stop, medics discovered. Patients are warned they should never quit unless specifically advised. In the UK, around 40 per cent of pensioners are prescribed daily aspirin.

Professor Johan Sundstrom, who led the study, warned the research suggested patients experience a “rebound effect” after stopping the aspirin treatment. He said because of the large number of patients on aspirin, and the high number who stop treatment, the importance of the rebound effect was significant.

In the UK, heart disease remains the biggest killer, claiming around 160,000 lives a year. Millions of pensioners – six in 10 among those over the age of 75 – are prescribed aspirin.

About half of these are patients who have already had a heart attack or stroke, while the others use it as a precaution. The pill is prescribed to help reduce the risk of such “cardiovascular events” by preventing clots forming in the blood vessels or arteries.

But the study, published in the journal Circulation, found that many stopped taking them. Ending a long-term, lowdose aspirin intake was found to radically increase the risk of a stroke or heart attack.

But it is estimated that almost a fifth of survivors stop daily aspirin use within the first three years following their heart attack.

And such poor compliance to prescribed aspirin therapy rose to 50 per cent in patients over the longer term, said Prof Sundstrom, from Uppsala University in Sweden.

To study the health effects of stopping aspirin, the researchers examined the records of 601,527 Swedish people who took low doses for heart attack and stroke prevention between 2005 and 2009.

The participants were older than 40 with an even split among the sexes. Their average age was 73 and each took around half a tablet daily with an adherence rate of 80 per cent.

In three years of follow-up there were 62,690 cardiovascular events like heart attacks and strokes. The researchers found one out of every 74 patients who stopped taking aspirin had one such additional event each year.

This rate was 37 per cent higher among those who stopped taking aspirin compared to those who continued. Prof Sundstrom said: “Low-dose aspirin therapy is a simple and inexpensive treatment [to avoid blood clots]. Our research shows the significant public health benefits that can be gained when patients stay on aspirin therapy.”

He said: “This study clearly demonstrates the importance of taking your medications regularly.

“Discontinuing aspirin, despite medical advice, can increase your risk of cardiovascular event, such as a heart attack or stroke, by a shocking 30 per cent [plus].”

The study, part-funded by Anglo-Swedish pharmaceutical giant AstraZeneca, follows previous research that has hailed the protective benefits of aspirin. However, the taking of aspirin remains contentious in the medical community.

And earlier this year a separate study suggested taking a daily aspirin was far more dangerous than previously thought – causing more than 3,000 deaths a year from fatal bleeds. Experts say individual patients should discuss the risks with their GP.