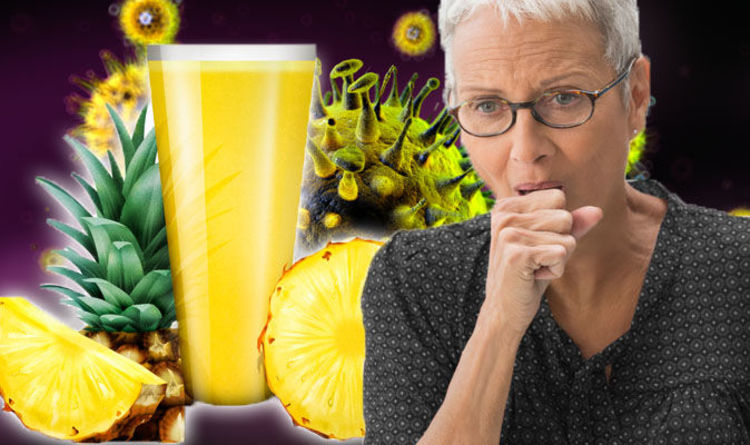 Aussie flu is just one of several flu strains currently circulating the UK.

About 2,000 people have been hospitalised by flu since the beginning of the winter season, Public Health England figures have revealed.

One sign of an infection with Aussie flu is having a cough.

While a dry, tickly cough can be annoying, you may be able to get rid of it by drinking pineapple juice, according to a study.

“One 2010 study found that pineapple juice was part of an effective treatment for tuberculosis, thanks to its ability to soothe the throat and dissolve mucus.

“According to this study, a mixture of pineapple juice, honey, salt, and pepper reduced cough symptoms up to five times faster than over-the-counter cough syrup.”

Pineapple juice was claimed to be extremely effecting in dissolving mucus in the lungs.

Bromelain could help respiratory problems linked to allergies and asthma.

But, you shouldn’t only use pineapple juice on its own to treat signs and symptoms of flu. They should be used alongside conventional, over-the-counter medicines.

Speak to a GP if your cough lasts longer than week, or disrupts your sleep.

Aussie flu could last until March, a doctor has claimed.

The influenza A (H3N2) virus has spread across the UK, but the number of cases appears to be levelling out, latest figures have revealed.

“I reckon we’ve got a good few weeks to go,” said Dr Sarah Jarvis. “Cases are still on the rise but the rise does seem to be tailing off.

“We’ve got over twice as many people in this year to see GPs as we had in the same time last year. The rise is definitely starting to flatten off, and what we do know is, given that we are still two, three times normal levels, it’s got a long way to go before it drops back to a really low level.”