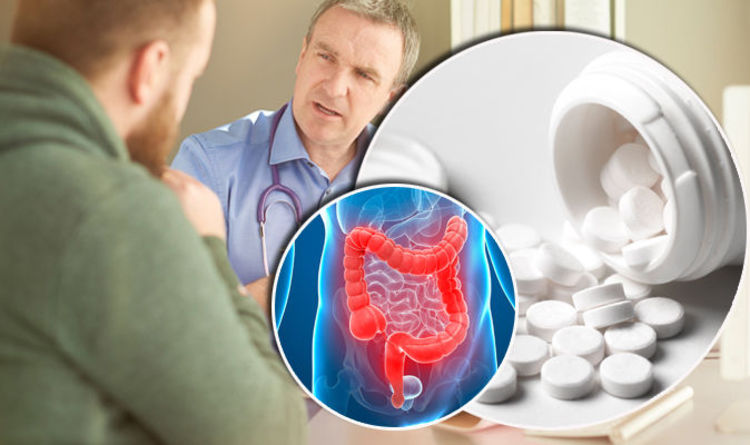 However, there is a catch, as now experts have revealed aspirin could also bowel cancer harder to treat if it does develop.

The findings would mean aspirin has the ability to prevent against bowel cancer, but it would come at a cost.

Experts suggest taking aspirin for three years could be beneficial.

Bowel Cancer UK said: “There is some evidence that long-term use of aspirin lowers the risk of developing non-cancerous growths (polyps) and bowel cancer.

“But aspirin may also cause side effects, such as indigestion or bleeding, and we don’t know how safe it is to take regularly.

“Doctors do not usually recommend taking aspirin regularly unless you’re taking part in a clinical trial.

“If you’re thinking of taking aspirin, speak to your GP or cancer specialist first.

“They can advise you on the safety of aspirin and whether it might benefit you.”

BOWEL CANCER DIET COULD REDUCE THE RISK OF DISEASE

Evidence has suggested that doses of aspirin taken over a number of years can reduce the risk of cancer later in life.

A new study, published in the Journal of the Royal Society Interface, found the drug could make the cancer more difficult to manage therapeutically.

This, they said could ‘indicate a potential trade off’.

“Taking aspirin regularly has been shown to reduce the incidence of a variety of cancers,” including of the colon, stated the authors of a study in the Journal of the Royal Society Interface.

But at the same time, the drug may render the cancer “more difficult to manage therapeutically,” they added.

“This indicates a potential trade-off.”

Bowel Cancer UK also said there is evidence to suggest aspirin reduces the risk of bowel cancer in people who have Lynch syndrome.

The most common side effects of aspirin are indigestion and bleeding.

Up to one in every ten people (ten per cent) may get more nose bleeds, bleed for longer or bruise more easily.