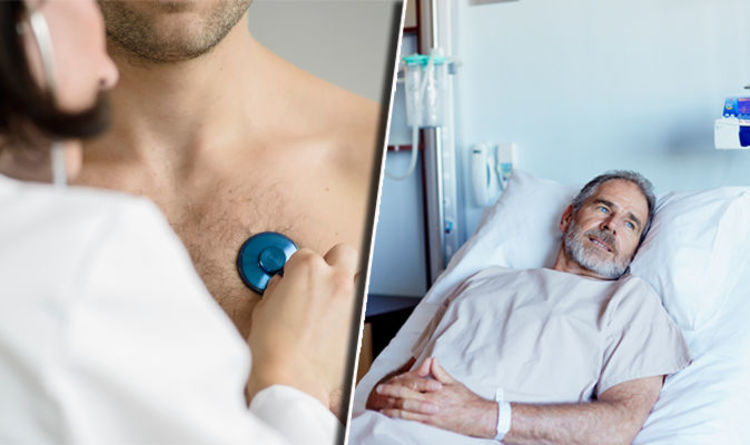 Breast cancer may be more associated with women, but it can also affect men too.

According to the NHS, it can develop in the small amount of breast tissue behind the nipple.

It usually occurs in those over the age of 60, but it can affect younger people too.

However, the cancer can prove just as deadly – which is why it is important to stop it early.

Here are the five key signs a man could be suffering from breast cancer.

According to the NHS, cancerous breast lumps usually occur in one breast, develop under or around the nipple and are usually painless.

They also normally feel hard or rubbery, don’t move around within the breast, feel bumpy rather than smooth and get bigger over time.

However, most lumps are not a sign of cancer and usually gynaecomastia (enlarged male breast tissue), a lipoma (fatty lump) or a cyst (fluid-filled bump).

But it is worth getting any lumps you are worried about getting checked by a GP.

According to the NHS, a nipple turning inwards is a sign.

This is also a key sign of breast cancer in women.

A sore or rash around the nipple that doesn’t go away could also be a symptom.

Men should also look for skin puckering or dimpling.

Fluid oozing from the nipple (nipple discharge), which may be streaked with blood, could be a warning sign, say the NHS.

The nipple or surrounding skin becoming hard, red or swollen may likewise be an indicator.

Additionally, the area near the nipple could become scaly and itchy.

Other symptoms may occur if the cancer spreads to other parts of the body, such as the bones, lungs or liver.

These include feeling tired all the time, aching or painful bones, shortness of breath, feeling sick and itchy skin.

Around 75 men die from breast cancer each year, but it is possible for it to be treated effectively if caught early.

If you are concerned about any of the symptoms above you should see a GP as soon as possible.