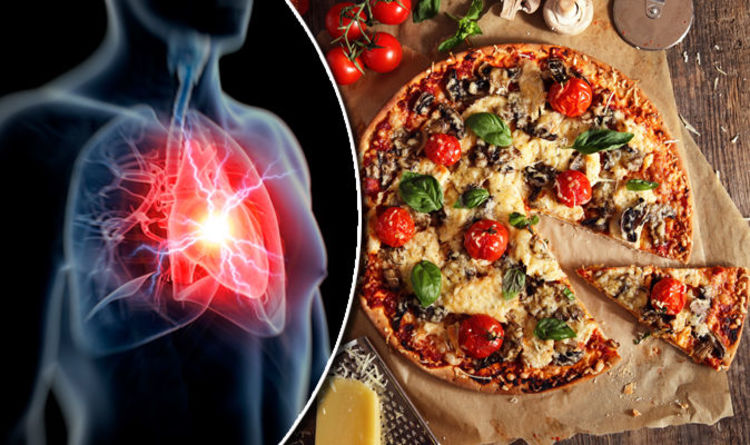 Coronary heart disease is where a waxy substance called plaque builds up inside the coronary arteries, and prevents oxygen-rich blood getting to the heart.

According to Heart UK, it is the leading cause of death in the UK.

What’s more, it kills many below the age of 75 years, and is responsible for 23,000 premature deaths a year in the UK.

Some people are at an increased risk of heart disease due to inherited risk factors, like familial hypercholesterolaemia.

The condition, where sufferers naturally have higher cholesterol levels, affects just one in 250 people in the UK.

Many more people have a raised risk due to a number of – often avoidable – lifestyle factors.

According to the World Health Organization, these are the eight which account for as many as 61 per cent of all cardiovascular deaths:

In Britain more than a third of men and over a quarter of women regularly exceed the government’s recommendations for alcohol, say Heart UK.

It is suggested you consume no more than 14 units a week – the equivalent of six pints of average strength beer.

Smoking kills around half of all persistent smokers, according to Heart UK.

It stimulates the formation of fatty plaques leading to the narrowing of arteries and reduced blood flow, and it reduces levels of ‘good’ cholesterol in the blood.

Heart UK note that of the one in three adults in England Scotland who have high blood pressure, half of them aren’t receiving any treatment.

Certain foods are thought to lower blood pressure, including blackcurrants.

Often shortened to BMI, it is measurement that takes into account height and weight.

Having a BMI of over 30 is considered overweight or obese.

Cholesterol is a fatty substance found in your blood, according to the British Heart Foundation.

Too much can be caused by eating too much saturated fat and trans fat.

Also known as hyperglycaemia, this is the defining characteristic of type 2 diabetes.

Risk factors for type 2 diabetes include being overweight and lack of physical activity.

In the UK, it is estimated that 70 per cent of adults fail to meet the average ‘five a day’ recommendations for fruit and vegetables.

It is recommended that adults get 30 minutes of moderate intensity activity at least five times a week.