DAILY aspirin can help people with potentially deadly Type 2 diabetes and heart failure to live longer, research suggests. About four million Britons have diabetes, with 90 per cent suffering from Type 2. 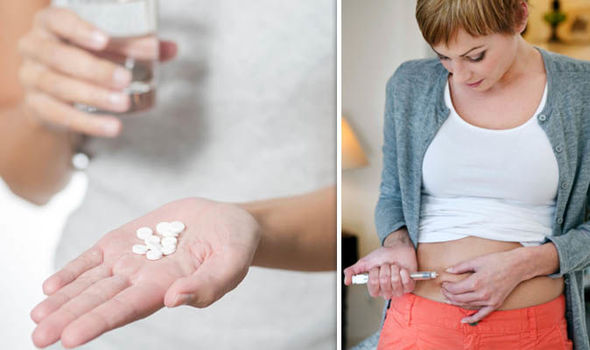 For those living with both conditions, an aspirin a day reduced their risk of dying, a large-scale study found. But scientists also found that the blood-thinning drug may increase the risk of a non-fatal heart attack or stroke.
About four million Britons have diabetes, with 90 per cent suffering from Type 2 which can often be tackled through lifestyle changes such as diet and exercise. Experts warn of a diabetes epidemic, with prescriptions for Type 2 sufferers rising by a third in five years from 26 million to 35 million.
We recommend that people who have been advised to take aspirin should continue to do so until they have discussed their individual circumstances with their healthcare team – Douglas Twenefour
Heart failure develops when the heart becomes weakened and struggles to pump enough blood to meet the body’s needs. Symptoms include breathlessness, feeling tired, swollen legs and ankles and dizziness.
Both conditions cause changes in the blood that make clot formation more likely, which is why they are associated with a higher risk of heart attacks and strokes. Aspirin helps to prevent blood clotting and is strongly recommended for patients who have had a heart attack or stroke.
Aspirin helps to prevent blood clotting and is recommended for patients who have had a heart attack. But studies on people without such a history have shown conflicting evidence, with some suggesting that a daily aspirin may even be harmful for heart failure patients.
Assistant Professor Charbel Abi Khalil, of Weill Cornell Medical College, in Qatar, who led the study, said: “Both heart failure and diabetes are associated with increased blood clotting activity”. “Because it decreases platelet aggregation, aspirin is thought to lower the likelihood of forming harmful blood clots like those responsible for heart attacks and strokes”.

Doctor shows what to do when someone has a heart attack

The study is the first to assess aspirin as a preventative measure for patients with both Type 2 diabetes and heart failure. Researchers looked at the health records of more than 12,000 British patients aged 55 and older who had both Type 2 diabetes and heart failure but no history of heart attack, stroke, peripheral artery disease or atrial fibrillation.
Roughly half had been prescribed daily aspirin and half had not. Experts warn of a diabetes epidemic, with Type 2 prescriptions rising by a third in five years. Health outcomes over an average of five years of follow-up were analysed and patients taking a daily aspirin were found to have a marginally lower death rate but a higher risk of a non-fatal heart attack or stroke.
Surprised Dr Abi Khalil will present the findings of the study next week at the American College of Cardiology’s Annual Scientific Session in Orlando, Florida. He said: “We were surprised to see a paradoxical increase in non-fatal heart attacks and stroke, parallel to the decrease in mortality”. “The finding might be due to the fact that those patients lived longer. Given their mean age of 70, perhaps these patients were predisposed to more cardiac events”.

Although chest pain is often severe, sometimes people only suffer minor pain, similar to indigestion. Here are some of the early warning signs and symptoms of a heart attack. He said patients should speak with their doctors to assess the benefits and risks of taking aspirin.
Commenting on the findings, Douglas Twenefour of Diabetes UK said yesterday: “Diabetes UK recommends that people who have been advised to take aspirin should continue to do so until they have discussed their individual circumstances with their healthcare team”. “It’s also important that people with diabetes, without a history of cardiovascular disease, discuss their individual risk of the condition with their clinician”.