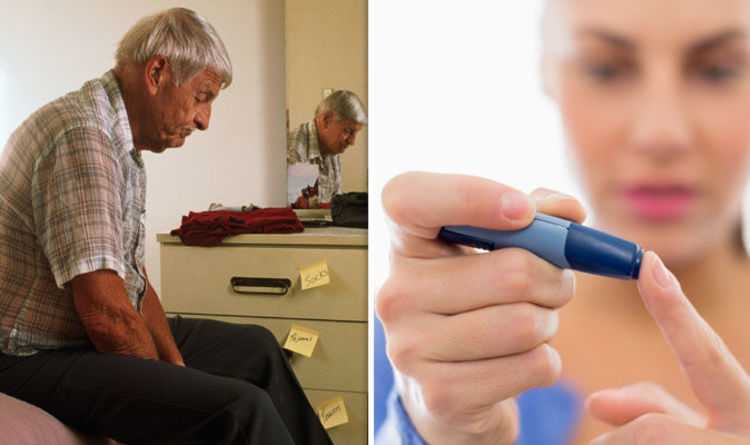 Rates of long-term mental decline are steeper in those with Type 2 diabetes, a study found.

But getting blood sugar levels under control could prevent the start of diseases such as Alzheimer’s.

Scientists have warned that chronically unhealthy lifestyles lay waste to the brain after research established a direct link between the debilitating condition and a breakdown in mental function.

Dr Wuxiang Xie, of the School of Public Health at Imperial College, London, said: “As there is currently no cure for dementia early intervention on modifiable risk factors, such as diabetes, may offer an important way to prevent cognitive decline. Indeed it has been established that intervention for treating and addressing modifiable risk factors for dementia could prevent up to a quarter of cases.”

Type 2 diabetes, where the pancreas fails to produce enough insulin or the cells do not react to insulin, is a risk factor for Alzheimer’s with impaired production linked to brain degeneration.

Type 2 now affects almost 1 in 10 adults in the UK. The latest study of more than 5,000 Britons aged over 50 is one of the largest to show a higher blood sugar reading indicates a steeper rate of mental decline.

British researchers and colleagues from Peking University Clinical Research Institute in Beijing, found rates declined with age in all participants, whether diabetic or not.

Yet compared to those with normal blood sugar levels the decline in people with prediabetes and diabetes was markedly increased.

The findings, published in the journal Diabetologia, were based on data from 2,329 men and 2,860 women over a decade.

Participants with an average age of 66 had blood sugar levels ranging from 3.6 per cent to 13.7 per cent. Diabetes is defined as having a reading of at least 6.5 per cent.

Just a slight increase in the reading was associated with a significant rate of cognitive decline, analysis revealed.

Dr Xie said: “Our findings suggest interventions that delay diabetes onset, as well as management strategies for blood sugar control, might help alleviate the progression of subsequent cognitive decline over the long term.”

Dr Emily Burns, of Diabetes UK, said: “This study adds to growing evidence linking diabetes and high blood glucose levels to a quicker progression of cognitive decline which can increase risk of developing dementia in the future. We now need to understand if and how diabetes causes this decline or if these conditions simply share the same biological processes. This will be crucial in finding ways to help people with diabetes keep their brain healthy.”

More than four million people are now blighted by Type 2 diabetes and a further 12 million who live unhealthy lives are at risk.

It means 25 per cent of the UK population has, or could develop, an illness that can lead to blindness, amputation, heart and kidney disease, strokes and death.

New cases are diagnosed at a rate of one every two minutes. In just 10 years the number of people living with the condition has rocketed with the cost of treating it reaching £1million every hour.

Cases have spiralled out of control as a result of the UK’s obsession with eating sugary snacks. Experts say most cases are preventable with changes to diet and exercising.

There are now 850,000 people living with dementia across the UK. Dr Clare Walton, of the Alzheimer’s Society, said: “There is an established link between Type 2 diabetes and dementia. We know it can raise your risk of developing dementia and can make the symptoms of dementia worsen more quickly. This study didn’t look at dementia but it does provide further evidence of a link between diabetes and cognitive decline, as well as highlighting the importance of healthy diet and exercise in slowing that decline.”