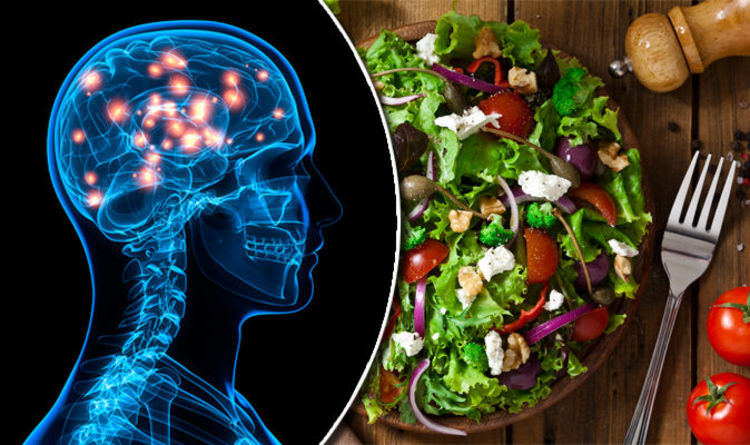 Dementia symptoms include memory loss and problems thinking, and it now affects 850,000 people in the UK.

It is not known what exactly causes the condition, but scientists are getting closer to working out how to effectively slow – or even stop – its onset.

One of the areas they are exploring is diet.

It is well known that oily fish, such as salmon and mackerel, is the ultimate ‘brain’ food, but it might be possible to add salad to that list.

Researchers have revealed that leafy, green vegetables, like spinach and kale, are linked to slower decline in memory and thinking.

The new study, published in the journal Neurology, found that they contained nutrients that could help stave off cognitive decline.

Consuming one serving a day – such as a lunchtime salad – was enough to reap the benefits.

They looked at 960 people with an average age of 81, who have not previously been diagnosed with dementia, over a period of 4.7 years.

The slower decline was the equivalent to being 11 years younger in age.

Vitamin K, which can be found in rich amounts in spinach, kale and asparagus, was highlighted as a nutrient that was particularly effective at slowing cognitive decline.

Dr James Pickett, Head of Research at Alzheimer’s Society, said: “The researchers did not directly look at dementia, so we cannot say that it would delay or prevent  the onset of the condition.

“However, older people who ate one or two servings of vitamin K rich food per day performed better on memory tests than those who didn’t.

“In fact, their scores were similar to those of people 11 years younger, irrespective of other factors such as obesity, high blood pressure and education level.”

Dr Sara Imarisio, Head of Research at Alzheimer’s Research UK, suggested that eating enough vegetables of any type would probably be just as beneficial.

“It is difficult to drill down to investigate whether a specific food or nutrient could hold particular benefits for memory and thinking skills, and this research doesn’t show that leafy, green vegetables promote brain health any more than other vegetables,” she said.

“Future studies will need to explore how leafy, green vegetables might contribute to brain function or if there is any link to whether people develop dementia.

“As well as eating a healthy diet with plenty of vegetables, research points to a number of other lifestyle factors that could help support brain health into old age.

“These include not smoking, staying mentally and physically active, keeping blood pressure and cholesterol in check and only drinking in moderation.”