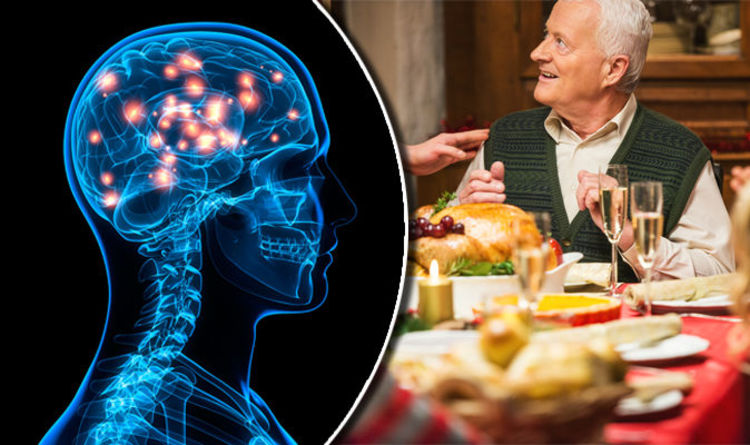 Quick diagnosis means that appropriate treatment can be given sooner to stop or slow the rate of further decline.

However, it can be easy to miss the early signs if you don’t see elderly relatives that often or for that long.

According to the Alzheimer’s Society, one in six people over the age of 80 years have the condition.

The Christmas period can be an ideal time to spot changes in family members.

“It is often the time of year for seeing family members for the first time in a while, and you will most likely notice small changes in loved ones that you would otherwise miss should you see them every day of the year,” said John Ramsay, the CEO of Shift 8, who have brought Tovertafel – a game designed for people with mid- and late-stage dementia – to the UK.

“Because of this, Christmas is a common time for relatives to observe the early traits of dementia, which can vary from person to person.

These are the early signs of the condition to look out for in older relatives.

It is common for a person with early vascular dementia to experience mood changes, like apathy, depression or anxiety, note the Alzheimer’s Society.

“This symptom is directly linked to memory loss, with those living with dementia being unable to process certain emotions,” said Ramsay.

“For most of us, if we have been in a bad mood, we can identify the origin, which is often half the battle in overcoming that feeling.

“However, those living with dementia will continue to have that nagging annoyance all day without an idea of why.

“It would quickly become clear that his mood did not always fit the situation.

“While it can be frustrating for all involved, avoid arguing with them over points, reminding yourself that their anger comes from a frustration they cannot control.”

“At Christmas, families are usually travelling to various relatives’ homes, and while it is a great way of getting to see everyone over the festive period, it can be an extremely challenging time for those living with dementia, who can rely on routines and a sense of familiarity,” warned Ramsay.

“These early signs are most prominent when a standard routine is broken, with the individual often becoming disorientated and increasingly agitated.

“Where possible, surround them with home comforts and follow a strict routine, it will really help.”

Many often associate symptoms of dementia with the mind, but a person’s movement can also be impacted, explained Ramsay.

“Dementia can cause people to become closed-off, avoiding any sense of social interaction, and as a result their physical movements can decline,” he said.

“It is important to keep them active and ensure their cognitive ability is kept stimulated through interactive games, such as those found on the Tovertafel, as this is crucial to keeping a healthy body and mind.”

According to the NHS, this is one of the core symptoms of Alzheimer’s disease, which is the most common form of dementia.

“This is one of the hardest symptoms to identify as everyone can be guilty of having a poor memory every now and again,” explained Ramsay.

“Yet there are subtle differences between forgetfulness and a declining memory, which is most apparent when the loss of memory starts suddenly or declines rapidly over a short period.

“We started to observe my father’s disjointed memory in conversations, in which he would try and steer the topic back to a specific time, most notably events before I was born, as this was a period in which his memory was most vivid.

“If you start to notice this in a relative at Christmas, try and keep conversations focused on topics they can join in on, so that they don’t start to feel isolated, and avoid trying to correct them, as this will likely lead to confusion and frustration.”