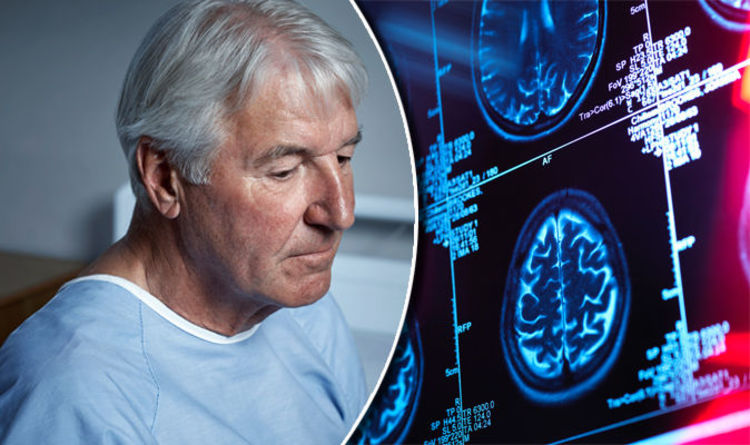 Dementia affects 850,000 people in the UK, with the majority diagnosed over the age of 65 years.

Research has found that older adults who are frail are 3.5 times more likely to develop symptoms.

A study by University College London, published in the journal Scientific Reports, found that people who were frail when scientists first began monitoring them had a much increased risk of getting the condition within the following ten years.

Additionally, adults about to become frail had just under twice the risk of developing dementia.

With frailty affecting around 17 per cent of elderly people in the UK, the new findings are a cause for concern.

Frailty is defined as having an issue with mobility, a physical disability,  poor general health, sight loss, problems hearing, and having chronic illnesses like cardiovascular diseases or depression.

According to the NHS, it is a loss of resilience meaning that they do not bounce back from physical or mental illness as quickly as others.

“Given what we know about the link between other health conditions, lifestyle and dementia risk, it is not surprising to see that frail people are more likely to develop dementia.

“Health services should be helping to reduce the impact of frailty, and frailty itself, by ensuring that people are properly supported, particularly after an accident or hospital stay.

“But, with incessant cuts to social care budgets and growing pressures on the health service, older people are not getting the help they need, increasing the risk and impact of frailty.”

However, Alzheimer’s Research UK pointed out that signs of frailty are also similar to early symptoms of dementia and so the link may be because sufferers might already have dementia.

“Dementia is not limited to memory problems and manifests in many ways, including reduced visual perception, so many markers used in this study to assess frailty could also be early indicators of dementia,” explained Dr Rosa Sancho, Head of Research at Alzheimer’s Research UK.

“The study cannot tell us whether the onset of dementia causes an individual to become frailer or whether increased frailty can contribute to the start of dementia, particularly as the researchers did not make a formal assessment of whether participants had dementia.

“Age is the biggest risk factor for dementia, and this research is an important reminder that many people living with dementia are also living with a range of health problems that can exacerbate the impact of the condition.

“An individual’s risk of developing dementia is influenced by a complex mix of age, genes and lifestyle.

“Currently the best evidence is that a healthy balanced diet, not smoking, only drinking in moderation and keeping weight, blood pressure and cholesterol in check all help maintain a healthy brain in later life.”