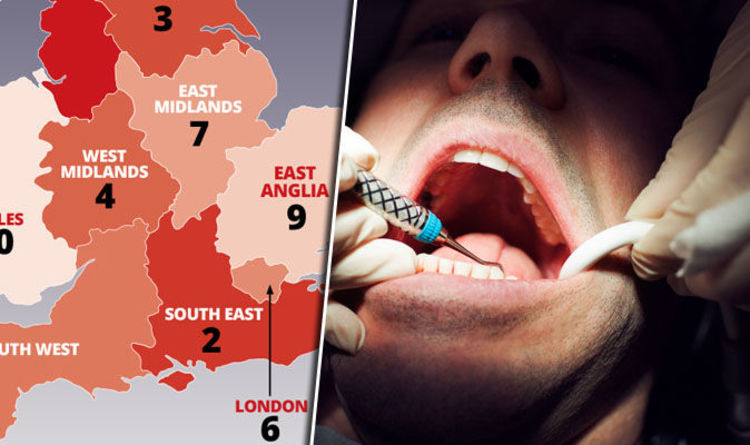 The North West of England is the worst place for dental work, according to the solicitor.

Between 2013 and 2017, about £7m was paid out in claims following poor dental work, the law firm claimed.

The South East was the second worst region for dental work, while Yorkshire & Humberside came third on the unwanted list.

Dental malpractice, or dental negligence, can be defined as an avoidable injury caused by a dentist who doesn’t take proper care, the firm said.

The solicitor’s David Corless-Smith said: “It is difficult to pinpoint exactly why patients are more likely to make a claim against their dentist in certain regions.

“One reason could be that there are more individual dentists consistently providing poor treatment in these areas.

“We handle a significant number of claims in every region and would urge anybody who thinks they may have been a victim of substandard dental work to look into it further.

The best and worst regions for dental treatment was calculated by analysing the number of successful legal complaints against dentists.

The number of claims in each region was divided by its population, to find the number of successful claims per 100,000 people.

The average settlement was worth £14,800, and the average age of claimant was 45 years old.

Meanwhile, last week it was revealed that dentists could be spreading an antibiotic-resistant superbug infection.

The dentists were giving patients with heart conditions the antibiotics as a preventative against heart infections, it was claimed.

The superbug causes life-threatening diarrhoea, and costs the US $1billion in medical costs a year.