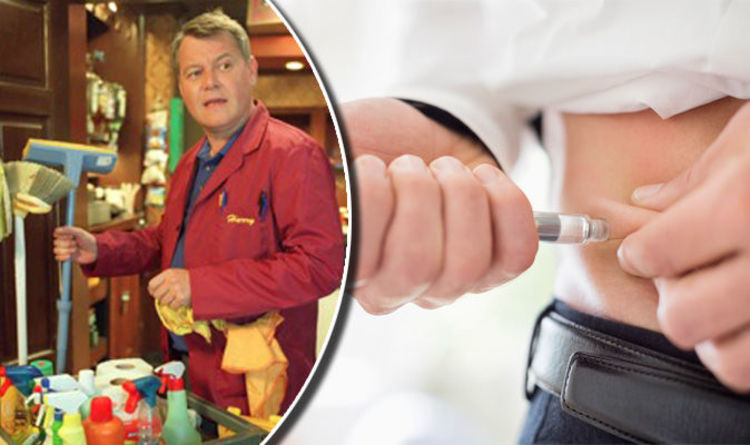 Former Coronation Street actor Iain Rogerson, who played Henry Flagg in the ITV show, died from a suspected insulin overdose on October 13, according to reports.

Too much insulin causes an overdose, and leads to hypoglycaemia.

The condition’s symptoms include double vision, confusion and shakiness. In most extreme cases, it can causes patients to lose consciousness, and even die.

Having too little glucose in the bloodstream means the body can’t operate properly.

Every patient reacts differently to low levels of glucose.

Common symptoms of mild hypoglycaemia include shakiness, a rapid heartbeat, irritability and tingling in the lips or around the mouth.

Patients with low blood sugar levels should eat about 15g of a high-sugar food, including honey, raisins or chocolate.

The amount of insulin diabetics need varies from person to person.

It depends on the type of insulin taken and the body’s sensitivity o the hormone.

The strength of insulin also varies. The most common strength is the equivalent of 100 units of insulin per ml of fluid.

But, some people require a higher dosage, so it’s available up to 500 units of insulin per ml of fluid.

Overdosing on insulin isn’t difficult, according to Healthline.com.

You can overdose from the hormone if you forget to take an injection, and then take another before necessary.

Overdoses can also be caused by accidentally injecting too much, exercising vigioursly without changing the dosage of insulin taken, or even forgetting to eat.

If you realise you may have overdosed on insulin, you should seek medical attention immediately.