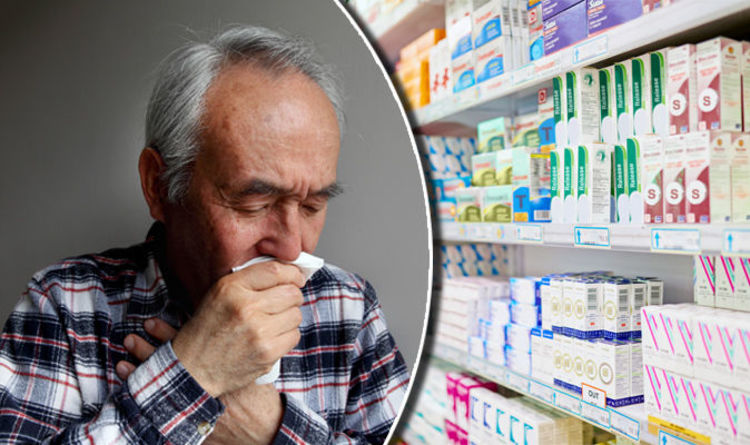 Flu and cold season is in full swing as the combination of plummeting temperatures and late-night festive celebrations leave Britons feeling under the weather.

While there are differences between colds and the flu – with the former being much more serious than the latter – the two common winter illnesses share many symptoms.

These include a fever, headache, sore throat, as well as a cough.

Many will turn to over-the-counter medications as a way to treat the latter ailment, which is caused by a virus.

An estimated £2.47 billion was spent in Great Britain on over-the-counter medicines between 2016 to 2017.

Pain relief was the top reason for purchases, closely followed by cough, colds and sore throats.

A rise in the sales of decongestants, cough liquids and lozenges in recent years has been attributed to official advice that coughs do not require a GP visit, and are best treated at home.

But do over-the-counter drugs actually work for a cough?

The NHS state that there is a lack of evidence that they do.

“But people are desperate to get some relief. They’re so convinced that they should work that they buy them anyway.”

There are currently no studies suggesting such drugs, which include dextromethorphan and guaifenesin, help relieve symptoms.

But while there is no proof that they do work, there is no research saying they definitely don’t, meaning they could still help.

However, the NHS recommend a homemade cough mixture – using honey, lemon and hot water – as a more effective treatment.

They add that drinking plenty of fluids and sucking on lozenges could also help, but that antibiotics definitely won’t.

Other flu and cold symptoms, such as a blocked nose, fever and headache, could be relieved with over-the-counter medications.