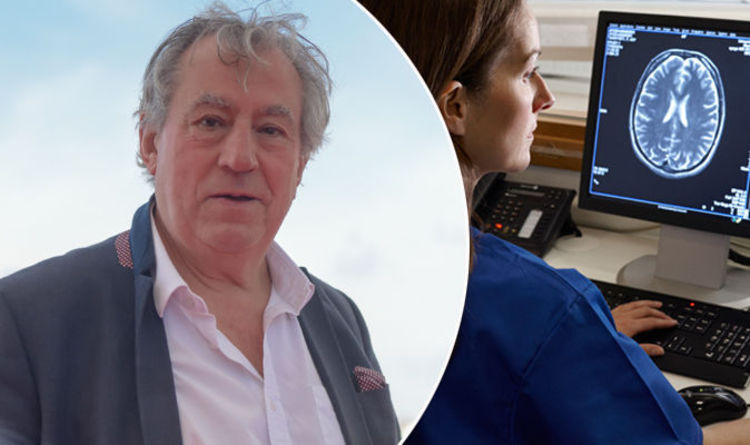 The condition occurs when nerve cells in the frontal lobes of the brain die, and the pathways which connect these lobes change.

As more nerve cells die, the brain tissue in the lobe shrinks. Symptoms can vary depending on which part of the brain is damaged.

The most common is behavioural variant FTD which can cause people to lose inhibitions, lose interest in people or things, show repetitive behaviour or crave fatty or sweet foods.

People with aphasia make mistakes in the words they use, sometimes using the wrong sounds in a word, choosing the wrong word, or putting words together incorrectly.

The National Aphasia Association said: “Aphasia can be so severe as to make communication with the patient almost impossible, or it can be very mild.

PPA is a condition which is caused by neurodegenerative disease – a umbrella term for the progressive loss of structure or function of neurons.

Alison said: “Terry can’t speak because he is living with a rare form of dementia and it is just so awful because he can’t do all the things that he used to do.

“But he still enjoys going out for long hikes and so we took part in our local Memory Walk because we wanted to support him continue to do things he loves and because it was for a cause close to our hearts.

“When he got home, after lunch at a pub on the way back, he wanted to go – and went – for his normal post lunch walk on Hampstead Heath for another one-and-a-half hours.

“Sadly, we now know just how absolutely devastating dementia can be for families affected by the condition which can be heart-breaking at times, but we felt we had to do our bit to help with fundraising and raising awareness.”

MAN DIAGNOSED WITH FRONTOTEMPORAL DEMENTIA AT 45

“Not only is he show business royalty, but his  presence gave so many people who were taking part a real lift as he showed that he is determined to battle dementia with everything he’s got.

“Someone develops dementia in the UK every three minutes.

“Walk with us at Memory Walk and dementia won’t win.”