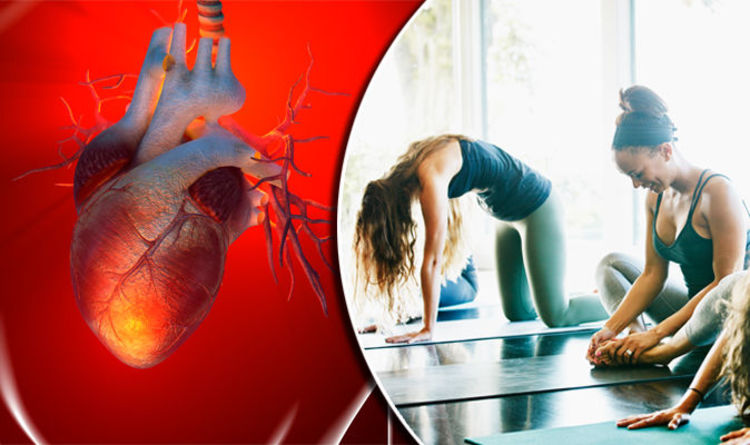 Heart disease causes more deaths in the UK each year than any other disease or condition.

However, certain types of exercise could help stave off symptoms, according to new research.

The low-intensity exercise was revealed to reduce blood pressure and cholesterol, as well as waist and circumference measurements.

Yoga, including the Indian yoga form looked at by the researchers, involves strength, flexibility and breathing exercises and it has risen in popularity in recent years due to its stress-reducing benefits.

While yoga on its own was beneficial, combining it with aerobic exercise – which is movement that increases the heart rate – made even more of a difference.

Doing both led to twice the reduction in blood pressure, body mass index and cholesterol levels.

This was compared to doing either just yoga, or just aerobic exercise.

Interestingly, just doing only aerobic exercise, or only yoga, showed similar reductions in risk factors, despite the former being considered a more intense type of workout.

The researchers analysed the effect of yoga and aerobic exercise on on the coronary risk factors of obese heart disease patients with type 2 diabetes.

In the study they looked 750 people who had previously been diagnosed with coronary heart disease.

Coronary heart disease kills 70,000 people in the UK each year.

“Heart disease patients could benefit from learning Indian yoga and making it a routine part of daily life.”

Other benefits of yoga include reduce stress and boosting the immune system.