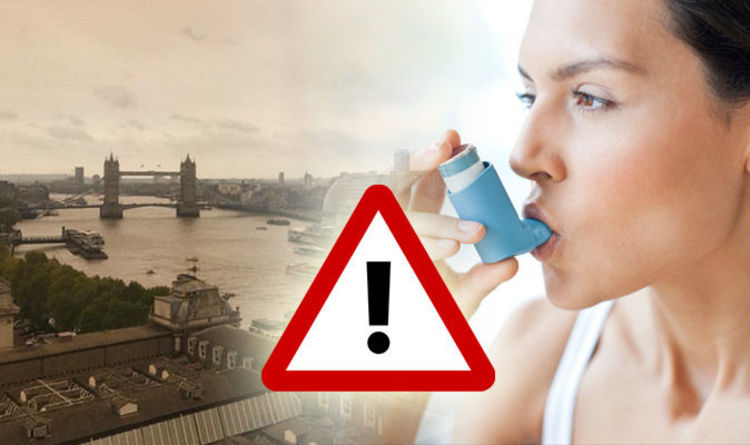 The asthma charity Asthma UK urged sufferers to stay inside, as the dust cloud could induce attacks.

The dust cloud originated from the Saharan Desert. Hurricane Ophelia sucked up winds from the desert, and blew the dust across Spain and toward the UK.

Asthma attacks could be triggered by dust and particles in the air, the charity warned. Sufferers have been urged to remain indoors where possible, and to carry their inhalers with they everywhere they go.

Sonia Munde, Head of the Helpline at Asthma UK told Express.co.uk: “We are deeply concerned about the toxic air from Saharan dust that Hurricane Ophelia has churned up, as this could pose a severe risk for the 5.4million people in the UK who have asthma.

“Winds picking up dust and particles in the air could trigger potentially fatal asthma attacks. When a similar dust storm happened in April 2014, Asthma UK found a third of people told us they’d had an asthma attack as a result of the pollution and 84% said they had used their blue inhaler more than usual.

“We urge anyone with severe asthma to check weather forecasts and stay indoors where possible.

“If you have an asthma attack and are unable to control it, call 999. For further information and support visit asthma.org.uk/Saharan-dust.”

A similar dust storm hit the UK in April 2014, and about a third of asthmatics subsequently suffered asthma attacks, the charity said.

More than four out of five asthma patients said they used their blue inhaler more than usual during the dust storm.

“If you have an asthma attack and are unable to control it, call 999.

For further information and support visit asthma.org.uk/Saharan-dust,” the charity urged.

About two-thirds of Asthma patients suffer worse symptoms when the air quality is poor.

Tiny pollutants can irritate airways, and trigger asthma attacks. The particles found in dust, soot and diesel fumes are also small enough to get right into your lungs, it added.

They can make your airways inflamed and swollen, and instigate asthma symptoms.

Pollution is an asthma trigger that’s hard to avoid, which is why it’s important to manage the condition well, the charity said.