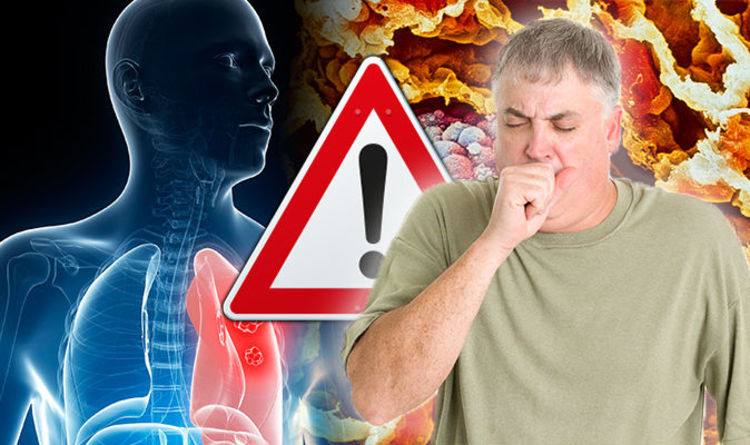 Lung cancer usually shows no signs in the early stages, but when symptoms begin to develop they could easily be mistaken for more common and less serious illnesses such as a cough, a chest infection or asthma.

The most common symptom of lung cancer is a cough, particularly one that doesn’t go away or gets worse.

If you’ve had a cough for longer than three weeks you should contact your GP surgery for advice.

But with some of the other symptoms of lung cancer – ones deemed more serious – you should be checked by your GP sooner rather than waiting three weeks.

After a cough, there are seven other symptoms of lung cancer, according to Bupa:

There are also three less common symptoms. These include:

Most cases of lung cancer are caused by smoking, although people who have never smoked can also develop the condition.

There are four stages associated with lung cancer:

Stage 1 is found in the lung but has not spread outside the lung.

Stage 2 is found in the lung and nearby lymph nodes.

Stage 3 is in the lung and lump nodes in the middle of the chest.

Stage 3A is found in lymph nodes, but only on the same side of the chest where cancer first starter growing.

Stage 4 means the cancer has spread to both lungs, into the area around the lungs or to distant organs.

The NHS says the main treatment options include surgery, radiotherapy and chemotherapy.

It adds: “Depending on your type of cancer and how advanced it is, you may receive a combination of these treatments.”

Why can lung cancer cause a swollen face?