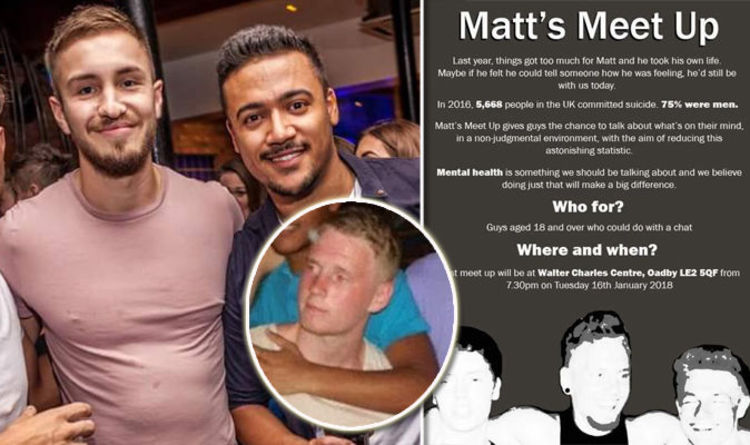 Jordan Mapp, 24, and Billy Webb, 25, revealed plans to start Matt’s Meet Up earlier this month after their friend Matt Western-Smith took his own life last year.

The Leicester-based pair hope to give men a chance to talk about what’s on their minds, in a non-judgmental environment.

While neither has medical experience or training – they describe themselves as “relatively normal people” – Mapp and Webb wanted to create a space for men to open up about life’s challenges.

Speaking about his late friend Matt, Mapp told Express.co.uk: “Matt was a funny, caring person. He really had nothing bad to say about anyone.”

Webb added: “He passed away last year, and at the time we didn’t know what was happening with him

“It just goes to show that sometimes you don’t know about it until it’s too late.”

Male rates of suicide remain consistently higher than female suicide rates across the UK and Republic of Ireland, the Samaritans report on its website.

In fact, male suicide figures are three times higher than female in the UK.

Matt’s friends told Express.co.uk that they wondered if Matt had told someone how he was feeling, whether he might still be with them today.

After finding inspiration from another community group for men – Andys Man Club – they decided to start Matt’s Meet Up.

The pair hope creating an environment for men to talk about what’s on their mind might prevent something similar happening to other people.

“I found speaking to a doctor about mental health was difficult – maybe it was a pride thing,” said Mapp. “But, I found it much easier to talk to friends about it afterwards.

“That’s how we came up with the idea.”

The community group has been backed by the University of Leicester, and local colleges, they said.

The Matt’s Meet Up post on Facebook has been shared more than 1,200 times, and they’ve received “really supportive messages”.

“Mental health is something we should be talking about, and we believe doing just that will make a big difference.”

For more information see Matt’s Meet Up on Facebook.

For confidential support call the Samaritans in the UK on 116 123 or visit a local Samaritans branch.