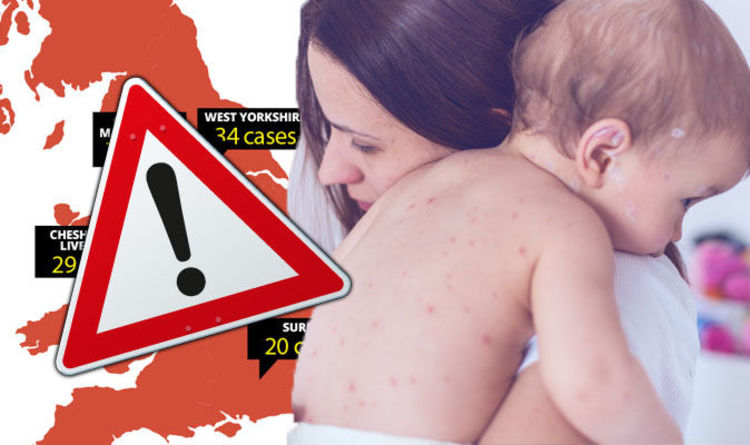 A measles outbreak has now affected 122 people in the UK, Public Health England (PHE) has confirmed.

West Yorkshire has reported 34 cases of measles, while 29 people became infected in Liverpool and Cheshire, and seven in Greater Manchester.

More than 50 cases were reported in the UK since the middle of December.

“The measles outbreaks we are currently seeing in England are linked to ongoing large outbreaks in Europe,” said PHE Head of Immunisation, Dr Mary Ramsay.

“The UK recently achieved World Health Organization measles elimination status and so the overall risk of measles to the UK population is low, however due to ongoing measles outbreaks in Europe, we will continue to see cases in unimmunised individuals and limited onward spread can occur in communities with low measles, mumps and rubella vaccine [MMR] coverage and in age groups with very close mixing.”

Parents should take up the offer of MMR vaccination for their children, PHE urged.

The vaccine should be given to children at one years old, and as a pre-school booster jab at three years and four months old.

If you’re not sure whether you’ve had the MMR jab, you should contact your GP practice to catch-up, said PHE.

Last month, PHE and the NHS confirmed that measles had been spotted in in Liverpool, Leeds, Manchester, Birmingham and Surrey.

Seventy cases of the highly infectious virus had been reported, in total.

All of the cases were reported in children and adults that didn’t receive two doses of the MMR vaccine, PHE said.

Measles is a highly infectious condition that can cause a high fever, sore, ready, watery eyes, and a blotchy red brown rash, according to the NHS.

The illness starts with cold-like symptoms, but develops into a measles rash after a few days.

Some people may also develop small greyish-white spots in their mouth.

You can lower your risk of developing measles by avoiding anyone that’s been infected. The MMR vaccine could prevent infection.

If you become infected with measles, the best thing to do is to stay away from work or school for at least four days after the rash first develops.

Try to avoid contact with people who are most at risk of catching the virus, including young children and pregnant women.