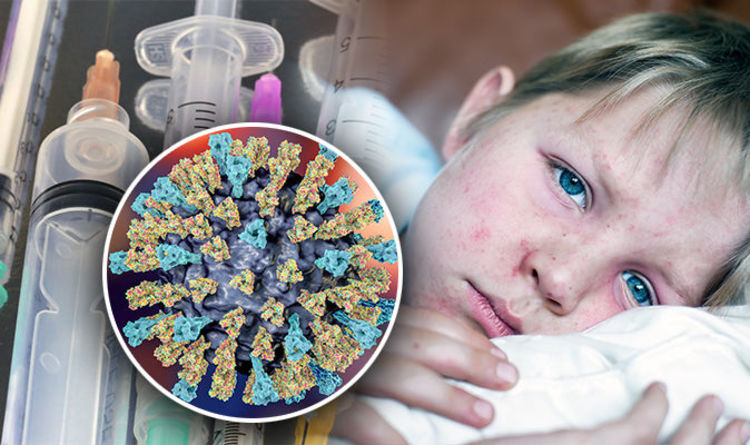 A spokesman for Public Health England (PHE) said the current cases are linked to “ongoing large outbreaks” in Europe.

But are you aware of the symptoms and what’s the best way to protect yourself against the illness?

While the infection usually clears in around seven to ten days, the initial symptoms of measles develop around ten days after you’re infected.

According to the NHS the early signs include:

A few days later, a red-brown blotchy rash will appear.

The NHS adds: “This usually starts on the head or upper neck, before spreading outwards to the rest of the body.”

The rash is made up of small red-brown, flat or slightly raised spots that may join together into larger blotchy patches.

It usually first appears on the head or neck, before spreading outwards to the rest of the body and is slightly itchy for some people.

Are you protected by the measles, mumps and rubella (MMR) vaccine?

BUPA says the most effective way to protect against measles is immunisation with the measles vaccine.

The World Health Organisation recommends all children should have the MMR vaccine so that serious heath problems aren’t caused by an outbreak of measles (also mumps and rubella).

If the MMR vaccine isn’t suitable for you, a treatment called human normal immunoglobulin can be used if you’re at immediate risk of catching measles.

The vaccine is given as part of the routine NHS childhood vaccination programme, but contact your GP if you are uncertain about whether your child’s vaccinations are up-to-date.

If you can’t remember if you’ve been vaccinated in the past, you can be vaccinated again and it won’t cause any harm.

You should contact your GP as soon as possible if you suspect that you or your child may have measles.

It’s best to phone before your visit as your GP surgery may need to make arrangements to reduce the risk of spreading the infection to others.

Doctors are urging parents to vaccinate their children against measles, despite the UK reaching “elimination status” in 2016.