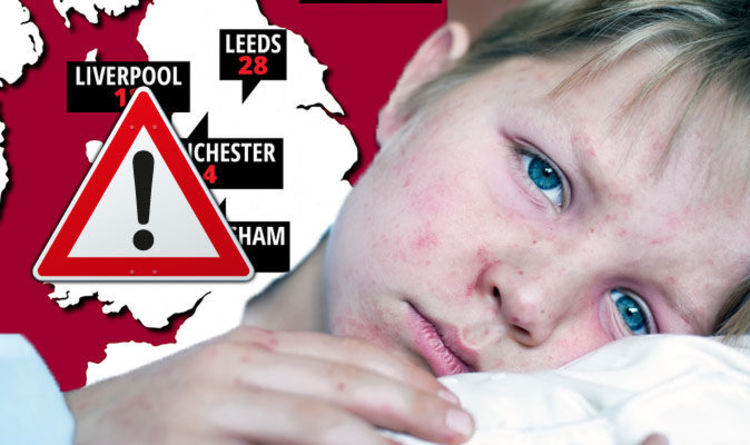 Measles has spread as far south as Surrey, as Public Health England (PHE) confirms 70 cases of the deadly viral disease in the UK.

Leeds has seen 28 confirmed cases of Measles, as of December 8, while 18 cases were in Liverpool.

Birmingham has reported 13 cases, seven cases were confirmed in Surrey, and Manchester has had four instances of measles.

All of the cases were reported in children and adults that didn’t receive two doses of the MMR (measles, mumps and rubella) vaccine.

“The measles outbreaks we are currently seeing in England are linked to ongoing large outbreaks in Europe,” said PHE Head of Immunisation, Dr Mary Ramsay.

“The UK recently achieved WHO measles elimination status and so the overall risk of measles to the UK population is low, however due to ongoing measles outbreaks in Europe, we will continue to see cases in unimmunised individuals and limited onward spread can occur in communities with low MMR coverage and in age groups with very close mixing.

“This serves as an important reminder for parents to take up the offer of MMR vaccination for their children at one year of age, and as a pre-school booster at three years and four months of age.

“Children and young adults who missed out on their MMR vaccine in the past or are unsure if they had two doses should contact their GP practice to catch-up.”

Last month, PHE and the NHS confirmed the highly infectious virus had been spotted in Leeds and Liverpool. Manchester was put on alert.

Thirty-six cases had been confirmed in total, at the time.

Now, PHE has urged people travelling to Romania, Italy and Germany to make sure they’ve had both MMR doses before travelling.

There are currently outbreaks of measles in the three European countries, increasing the risk of infection in those that aren’t vaccinated against the virus, PHE said.

Measles is an infectious condition that can cause a high fever, sore, ready, watery eyes, and a blotchy red brown rash, according to the NHS.

The illness starts with cold-like symptoms, and develops into the measles rash after a couple of days.

Some people may also develop small greyish-white spots in their mouth.

You can prevent getting measles by avoiding anyone that’s been infected, or by getting the MMR vaccine.

If you have the virus, the best thing to do is to stay away from work or school for at least four days from when you first developed the measles rash.

Also, try to avoid contact with people who are most at risk of catching the virus, including young children and pregnant women.