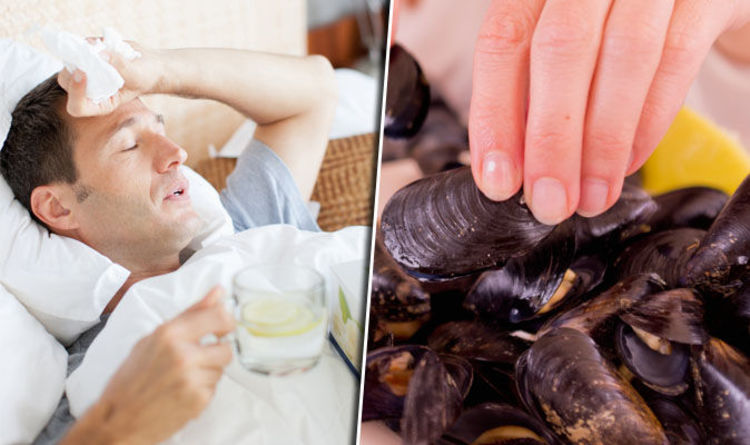 Oysters, mussels, scallops and clams could harbour the bug, according to Dr Roger Henderson.

The winter vomiting bug is the most common stomach bug in the UK. Between 600,000 and one million people will catch norovirus in the UK this year, it was estimated.

Shellfish eaters have been urged to avoid eating bivalve molluscs to reduce the risk of contracting the virus.

If eating out, the public has also been advised to make sure the restaurant has the highest food hygiene rating.

Dr Henderson said: “Norovirus is incredibly contagious and can be passed on through contact with an infected person, or contact with contaminated surfaces or objects.

“You can also get the virus from contaminated food and water, especially bivalve molluscs – oysters, mussels, clams, cockles and scallops.

“Avoid shellfish if there is an outbreak and if you’re eating out, make sure the restaurant has the highest level of food hygiene inspection score.”

The virus could also be passed from person to person on toilet seats and handles, Dr Henderson added.

Make sure you wash your hands regularly to lower your risk of getting norovirus, he said.

Wearing gloves when travelling on public transport will also help to ward off the bug.

If you become infected with norovirus, you shouldn’t prepare food for others until at least three days after the symptoms clear.

Most people recover from norovirus within a couple of days, and there is no specific treatment for the bug other than simply letting it run its course.

“Both vomiting and diarrhoea cause loss of water from the body,” said Dr Henderson. This means you need to drink plenty of liquids to replace lost fluids.

“Anti-diarrhoeal medicines, such as loperamide, can ease symptoms, while paracetamol can help aches and pains.”

Symptoms of norovirus include stomach cramps, fever, and aching limbs, as well as vomiting and diarrhoea.

Meanwhile, last week health officials warned the public to be vigilant against the winter vomiting bug.