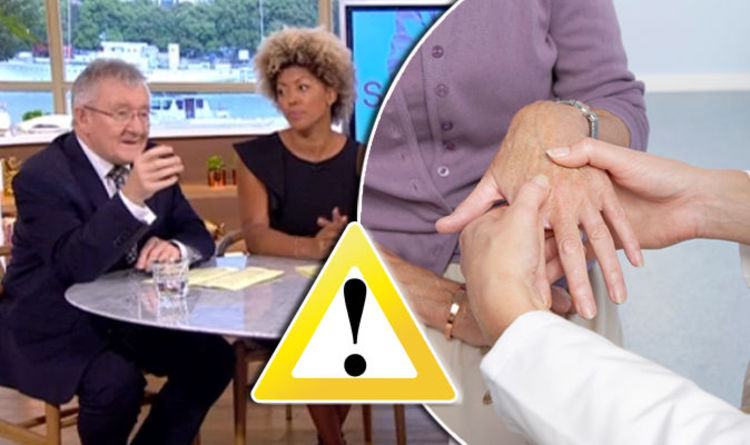 One woman has contacted This Morning to seek a second opinion for her symptoms, which she believed could be linked to arthritis.

Abbie, the caller said: “I’m only 20 but when I wake up on the morning my fists are clenched.”

Abbie’s father has ankylosing spondylitis – a form of arthritis which causes back pain, stiffness, fatigue and impaired mobility that develops over time.

Dr Chris said: “It usually affects the joint at the bottom of the back.

“You are three times more likely to get it if you have a parent with it.”

However, Abbie said it was just her hands and fingers which were affected.

Dr Chris said: “I would be thinking about rheumatoid arthritis – you can get it in your twenties.

“You would need to be referred to a rheumatologist – especially if it is worse in the morning.”

Rheumatoid arthritis more commonly affects people between the ages of 30 and 60. However, it can affect children.

People suffering with rheumatoid arthritis often experience periods where the symptoms are worse.

These can be difficult to predict but there is treatment available which can ease pain and prevent long-term damage to the joints.

Some people with rheumatoid arthritis also experience problems in other parts of the body, or more general symptoms such as tiredness and weight loss.

The condition is an autoimmune condition, which means it is caused by the immune system attacking healthy body tissue – such as the lining go the joints.

It causes joints to become sore and inflamed and damages bones, cartilage, tendons and ligaments.

If the condition isn’t treated, these chemicals gradually cause the joint to lose its shape and alignment.