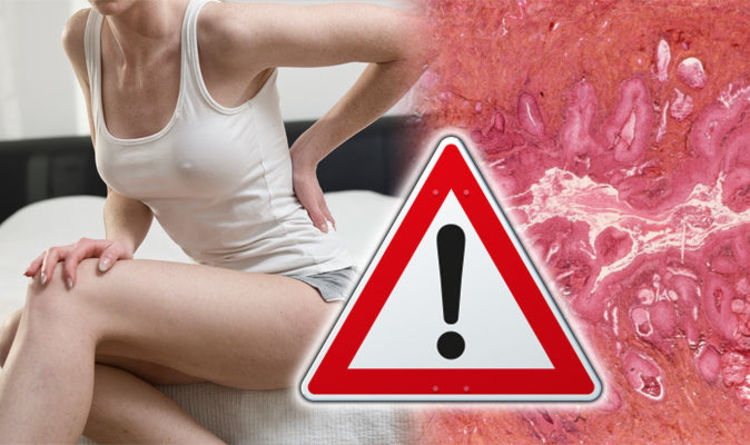 Cervical cancer develops in a woman’s cervix but often has no symptoms in its early stages.

The most common sign, according to the NHS, is vaginal bleeding, which can occur after having sex, in between periods or after the menopause.

Other signs can include pain and discomfort during sex and an unpleasant smelling vaginal discharge.

But the NHS states: “If the cancer spreads out of your cervix and into surrounding tissue and organs, it can trigger a range of other symptoms.”

Severe pain in your side or back caused by a condition called hydronephrosis – swelling of a kidney due to a build-up of urine – is one of these symptoms.

What are the causes of cervical cancer? Cancer Research UK says HPV, smoking tobacco and the contraceptive pill can put you at risk.

The human papilloma virus (HPV) is a major cause of the main types of cervical cancer.

HPV is common and most sexually active people come into contact with it during their lifetime.

But in most causes the virus causes no harm and goes away on its own.

According to the charity, the risk increases with the more cigarettes you smoke a day and the younger your age when you start smoking.

Smoking also makes it harder to treat abnormal cells on your cervix.

Taking the pill for more than five years increases the risk of cervical cancer, but this drops as soon as you stop taking it. After 10 years the risk is the same as if you had never taken it.

A newlywed’s ‘heavy period’ was a symptom of state 2 cancer.