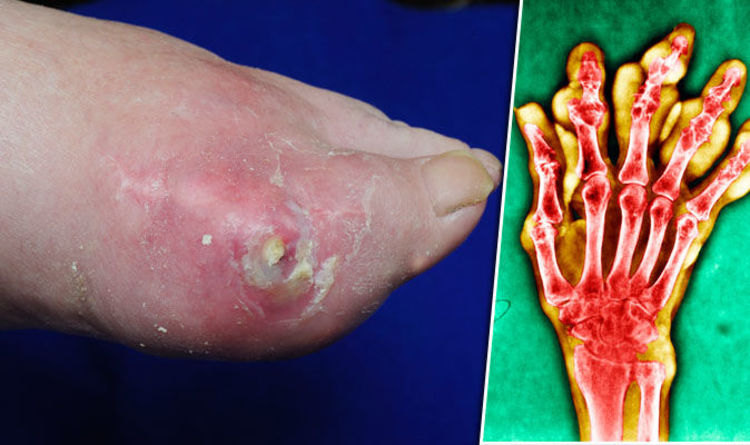 Gout symptoms include severe pain in one, or more joints, and a sensation of hot joints.

They can swell up, and become red and shiny all over the affected area.

Most people that get gout will end up with the condition again at some point, according to the NHS. Symptoms progress quickly over a couple of hours, and can last up to 10 days.

Gout now affects one in forty people in the UK, and those most at risk are men over 30, and women after the menopause.

The type of arthritis is caused by small crystals inside and around the joints.

The crystals are formed after a build-up of uric acid in the blood.

Joints become swollen and painful after the crystals have formed.

The risk of gout is increased with high blood pressure, diabetes, kidney problems, or obesity.

Drinking large amounts of beer or spirits could also lead to the condition.

The condition can lead to further complications if left untreated.

These include kidney stones and permanent joint damage.

In some cases, the crystals can build-up underneath the skin and form yellowy, pale lumps known as tophi.

Tophi can develop anywhere on the body, but are most common on the toes, heels, knees, fingers and ears.

The best way to treat gout is to visit your GP if the condition persists.

The NHS recommends visiting the doctor if you’ve never had the condition before, and you think you may it.

Anti-inflammatory drugs and other medication can be prescribed to help relieve some of the symptoms during a flare up.

Long-term preventatives include losing weight, and taking medication to lower the amount of uric acid in your body.