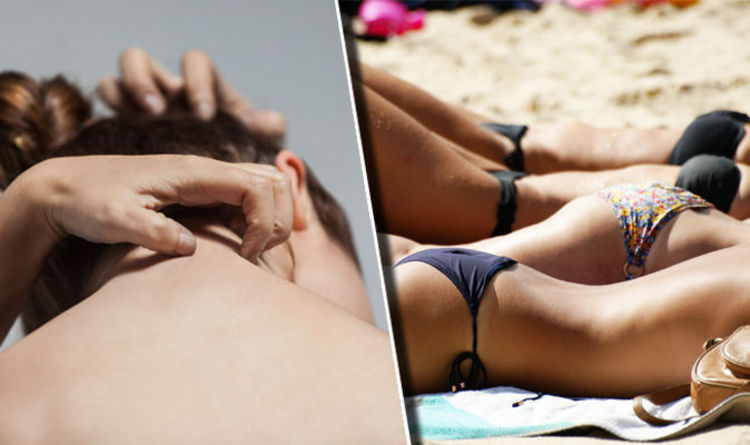 Skin issues affect the majority of people in Briton, however some types can be more serious than others.

According to a survey by the British Skin Foundation published last year, 60 per cent of people currently suffer from or have suffered from a skin disease.

The phrase ‘skin disease’ can include common conditions such as acne and eczema – but also includes serious conditions like skin cancer.

From dry, scaly skin to flushed red cheeks: five symptoms and the conditions they might indicate explained below.

If you are concerned by any changes in your skin, you should see a doctor.

An ulcer on the skin can be worrying for any patient; Cancer Research UK describes it as an area of skin that’s broken down.

According to the charity, if it doesn’t heal within four weeks it could be a sign of skin cancer.

Other symptoms include a spot or sore that doesn’t go away or looks unusual, a lump that is pink and shiny, or red patches that may also be itchy.

This is one of the symptoms of skin condition psoriasis.

Other signs include patches of skin that are red and covered in silver scales, as well as itching and soreness, according to the NHS.

The painful and often debilitating condition affects 1.8 million people in the UK alone.

Psoriasis can be due to genetics and problems with the immune system.

But it can also be triggered by smoking, stress, drinking excessive amounts of alcohol and some medications such as ibuprofen and beta-blockers.

This could be a sign of dietary intolerances. Geeta Sidhu-Robb, nutritionist and founder of Nosh Detox, told Express.co.uk: “As one consumes food that they’re intolerant to – the body’s defence system reacts to it and very often the reaction appears on your skin, especially on your face resulting in blotchy patches.

“Dairy, gluten and soy are some of the most common food intolerances.”

Sidhu-Robb added that there may be other reasons for problems with facial skin in particular. “Hormonal imbalances do leave blemishes on one’s skin and the most likely places hormonal imbalance related rashes do appear on the chin or in and around the mouth,” she said.

“Respiratory issues can also show as blemishes on the cheeks.”

These are signs of atopic eczema, another skin condition.

According to the NHS, it can also trigger patches of red that feel dry and sore.

It is most common on the hands, insides of the elbows or backs of the knees.

The condition affects six million people in the UK and often arrives in flare-ups up to two or three times a month.

Symptoms may be caused by genetics, food allergies, the weather, certain fabrics or irritants such as soap or washing up liquid.

This could be a nodule – a type of spot caused by acne, according to the NHS.

The skin condition also includes blackheads, whiteheads, papules or small red bumps, pustules with a white tip in the centre, or cysts which are large, pus-filled lumps that carry risk of permanent scarring.

Most people with acne will experience it on their face at some point, along with oily skin.

It is caused when tiny holes in the skin, known as hair follicles, become blocked.