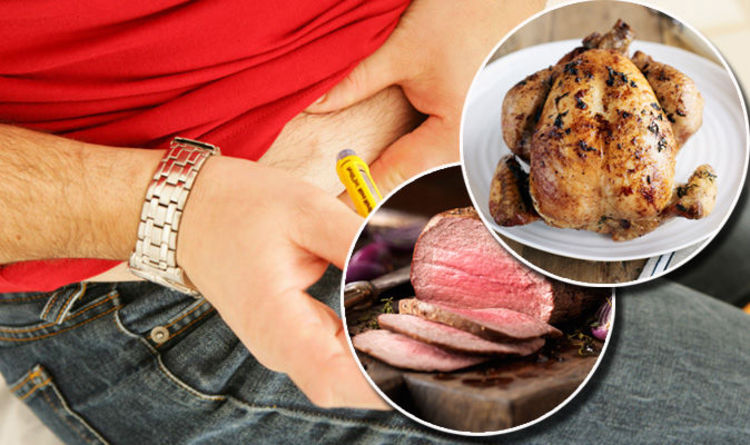 However, now experts have said not all meats affect the risk of develop type 2 diabetes equally.

Scientists have found higher intakes of red meat and poultry are associated with a significantly increased risk of developing diabetes.

Red meat includes beef and pork – so eating too many sausages, steak and bacon could pose a threat to health.

The experts said people at Duke NUS Medical School in Singapore said this could be partially attributed to the higher content of heme iron in the meat.

Heme iron is only found in meat, chicken and fish, and is easily absorbed by the body.

The findings came from the Singapore Chinese Health Study, which looked at more than 63,000 adults aged between 45 and 74 years between 1993 and 1998 and followed them up for about 11 years.

The study found a positive association between intakes of red meat and poultry, and the risk of developing diabetes.

Red meat has previously been linked to cancer risk.

Experts found eating fish and  shellfish was not associated with risk of diabetes.

The also found the increased risk associated with red meat and poultry was reduced by substituting them with fish and shellfish.

Professor Koh, senior author on the study, said: “We don’t need to remove meat from the diet entirely.

“Singaporeans just need to reduce the daily intake, especially for red meat, and choose chicken breast and fish/shellfish, or plant-based protein food and dairy products, to reduce the risk of diabetes.

“At the end of the day, we want to provide the public with information to make evidence-based choices in picking the healthier food to reduce disease risk.

“Although a number of western studies have consistently shown that red meat consumption should be moderated, this study is highly relevant as it is based on local population and consumption patterns.”

Experts also sought to understand why red meat and poultry can increase risk of diabetes.

They investigated the link between dietary heme-iron content from all meats and the risk of diabetes.

Even after they took the iron content into consideration – there was still a link between red meat and diabetes, which suggests other chemical in red meat could be to blame for diabetes risk.

However, after the iron content was adjusted for again, experts found no link between eating poultry and diabetes risk – which suggested the risk was attributable to the heme-iron content in poultry.

This is one of the largest Asian studies looking at meat consumption and diabetes risk.

This comes after it was revealed red meat could trigger painful bowel condition diverticulitis.