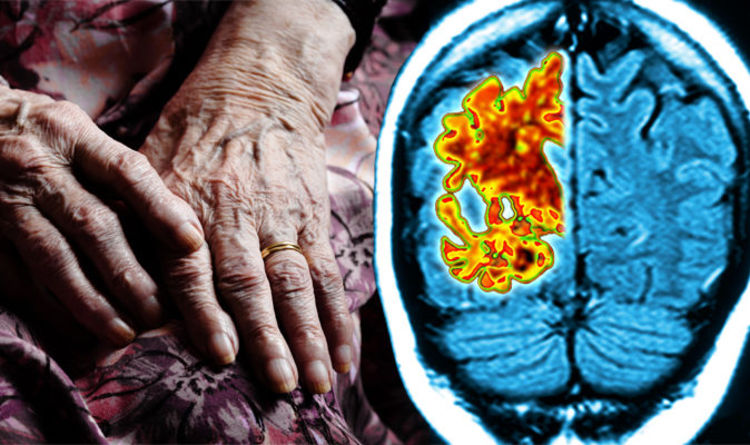 Vascular dementia affects 150,000 people in the UK, making it the second most prevalent type of dementia.

Earlier this year researchers revealed a strong link between the condition and surviving a stroke.

They found that one in three stroke sufferers will develop dementia within five years, while one in ten will experience brain decline within 12 months.

But what is the condition?

Vascular dementia is the second most common type of dementia after Alzheimer’s disease.

It can cause memory loss and difficulties with thinking and language. The disease occurs when the brain is damaged because of problems with the supply of blood to the brain.

Anyone who is concerned that they may have vascular dementia (or any other type of dementia) should seek help from their GP.

What are the causes?

Symptoms occur when the brain is damaged because of problems with blood supply.

They are triggered by the narrowing of the blood vessels inside the brain – a stroke – which causes the blood supply to the brain to be cut off, usually as a result of a blood clot.

The most frequent cognitive symptoms in the early stages are problems with planning or organising, making decisions or solving problems, difficulties following a series of steps, slower speed of thought, problems concentrating or periods of sudden confusion.

A person may also have difficulties with memory, language and the ability to perceive objects properly.

Mood changes can also be a key symptoms of the condition. Some people experience mood swings – rapidly becoming unhappy or tearful, and it is not uncommon for some to experience depression or anxiety as a result of the illness.

However, symptoms can change depending on which part of the brain is affected.

This can result in difficulty speaking, weakness or inability to move limbs or vision. Loss of bladder control can also occur.

Are there any other effects?

The condition can be caused by a series of mini strokes which cause damage to the brain. These can often be symptomless or cause temporary symptoms. To function properly, brain cells need a constant supply of blood.

But if the vascular system is affected – the way in which blood is delivered to the brain – brain cells can be damaged and they will eventually die.

Who is at risk?

The Alzheimer’s Society said age is the strongest risk factor for vascular dementia.

It stated: “A person’s risk of developing the condition doubles approximately every five years over the age of 65.

“Vascular dementia under the age of 65 is uncommon and affects 8,000 people in the UK.

“Men are at slightly higher risk of developing vascular dementia than women.”People who have had a stroke, diabetes or heart disease are twice as likely to develop the condition but conditions such as depression or sleep apnoea can put people at risk. The Alzheimer’s Society said: “There is good evidence that keeping mentally active throughout life reduces the risk of dementia.”

Researchers also believe there are genetic factors behind vascular dementia.

Lifestyle changes, such as maintaining health blood pressure through diet and exercise, could reduce your risk.