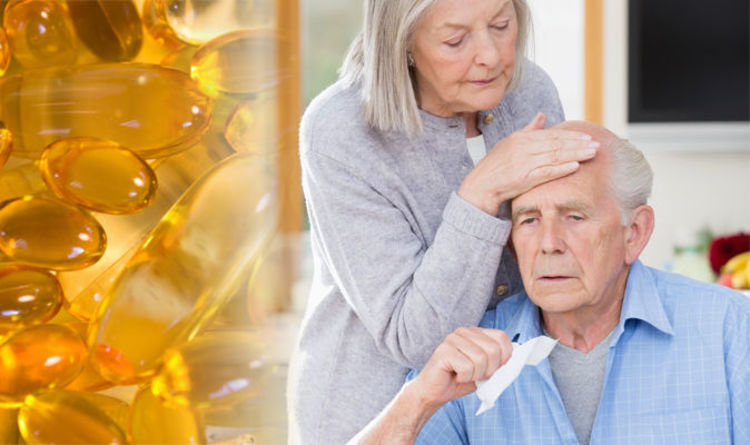 Vitamin D plays an important part in the function of the body, regulating the amount of calcium your body needs to keep bones, teeth and muscles healthy.

It primarily comes from sunlight, which means it’s easy to get during the summer months.

But during the winter months, with shorter sunlight hours and people spending more time inside to keep warm, you can stand the risk of being vitamin D deficient.

Children from the age of one year and adults need 10mcg of vitamin D a day, according to the NHS.

It says: “During the autumn and winter, you need to get vitamin D from your diet because the sun isn’t strong enough for the body to make vitamin D.”

But since it’s difficult for people to get enough vitamin D from food alone, everyone (including pregnant and breastfeeding women) should consider taking a daily supplement containing 10mcg of vitamin D during the autumn and winter.

The health body adds: “Between late March/early April to the end of September, most people can get all the vitamin D they need through sunlight on their skin and from a balanced diet. You may choose not to take a vitamin D supplement during these months.”

What are the signs of a vitamin D deficiency?

Naturopathic Nutritionist Amy Morris, from Water for Health, revealed the tell-tale signs you’re not getting enough.

Hair loss is often attributed to stress, according to Amy, which is the most common cause. But when hair loss is severe, it is recommended to look at whether it is the result of a nutrient deficiency. Vitamin D, in particular, is understood to be one of the most important nutrients required for the body to function.

Amy said: “The negative impact of a vitamin D deficiency on the body can lead to conditions that cause hair loss, and there is evidence to suggest that vitamin D is directly involved in supporting the process of hair growth and hair follicle health.”

Feeling tired often has many causes, but vitamin D is commonly overlooked as one of them.

Amy said: “Individuals diagnosed with a vitamin D deficiency are known to complain of low energy and muscle fatigue, with long-term vitamin D supplementation being shown to improve these symptoms.”

Chronic sweating, particularly on your forehead, is a known indicator that your body is lacking in vitamin D, says Amy.

She added: “This form of sweating is likely to take place when the individual has done very little, often making it an embarrassing situation but one which can be dealt with easily by upping your vitamin D intake.”

Vitamin D is essential in maintaining bone health, so pain in your bones or lower back could be an indicator that you’re not producing enough of the vitamin.

Amy said: “Studies have shown that people with low vitamin D levels were two times as likely to have aching bones in their legs, ribs or joints compared with people who had sufficient levels of the vitamin. This is a dangerous and important symptom to look out for, as it can contribute to the risk of developing osteoporosis and fractured bones later in life. To combat this, I would recommend taking UnoCardio1000, a unique, high quality supplement which contains omega-3 as well as vitamin D3 to alleviate deficiencies in the body and help maintain healthy bone structure.”

Being prone to colds and feeling blue can also be signs of a vitamin D deficiency.