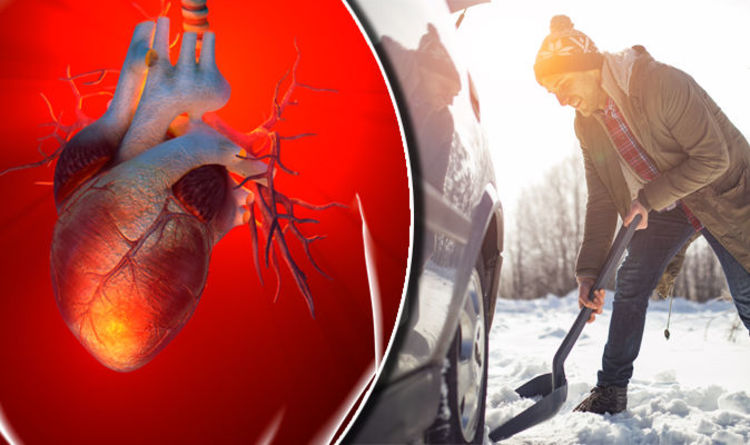 Weather in the UK has been harsh for much of the past week, with both snow and sub-zero temperatures causing Britons to dig out their gloves and turn up the heating.

While it is tempting – and often necessary – to shovel snow out of the way outside your home, experts have warned the danger the activity poses to your health.

This is because shovelling snow could trigger a potentially-fatal heart attack, which have also been found by research to be more likely in the morning.

According to experts at Harvard Medical School it is often because it is the only exercise people may do within a 12-month period, meaning a lot of strain is placed on the heart.

Indeed, it can be more strenuous on the body than going full-power on a treadmill, according to research that compared heart rates and blood pressure between the two activities.

While not all heart attacks kill, shovelling snow causes around a hundred deaths a year, according to US research.

A study by the US Nationwide Children’s Hospital discovered 1,647 recorded cardiac-related deaths between 1990 and 2006 linked to shovelling snow.

“I believe we lose hundreds of people each year because of this activity,” said Barry Franklin, director of preventative cardiology and cardiac rehabilitation at William Beaumont Hospital in Michigan, to the BBC.

“Combine this with cold air, which causes arteries to constrict and decrease blood supply, you have a perfect storm for a heart attack.”

Earlier this week in Britain the NHS warned of an increased risk of heart attacks during cold weather.

Low temperatures are thought to account for two out of five unnecessary deaths from heart attacks during winter in the UK.

The health service said they expected the snowy weather to trigger a rise in the number of elderly admitted to A&E.

Keith Willett, the national director for acute care at NHS England, said: “Patients who have pre-existing conditions may not be aware that they are most at risk of falling ill in the days after temperatures drop.

The warnings come after a Canadian study, published in September by the Universitié Laval in Québec, revealed an association between heart failure rates and chilly weather.