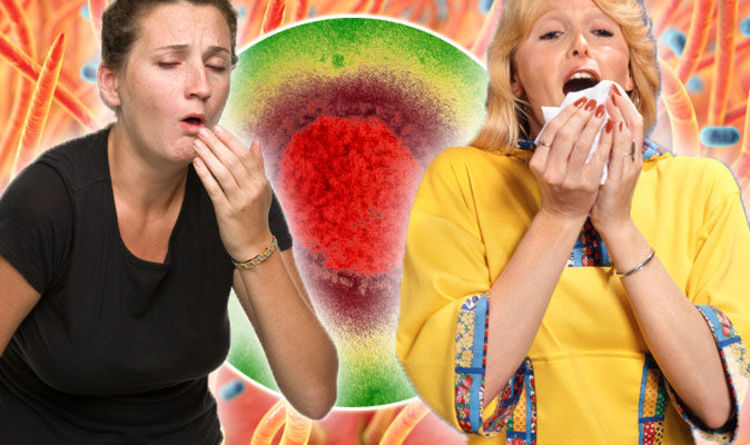 Whooping cough gets its name from the characteristic ‘whoop’ sound patients make while gasping for breath between coughs, according to the NHS.

The condition, also known as pertussis, is a highly contagious bacterial infection of the lungs and airways.

Coughing bouts tend to last for two to three months, and young children are most at risk of infection.

But, some vaccines may help to protect children against the bacterial infection.

“There are three routine vaccinations that can protect babies and children from whooping cough,” said the NHS.

“These vaccines don’t offer lifelong protection from whooping cough, but they can help stop children getting it when they’re young and more vulnerable to the effects of the infection.

“Older children and adults aren’t routinely vaccinated, except during pregnancy or a whooping cough outbreak.”

Pregnant women can protect their babies by getting vaccinated. The best time to get the jab is shortly after the 20th week of your pregnancy.

There’s no whooping cough-only vaccine, so you’ll likely be given a four-in-one vaccine that also protects against polio, diphtheria and tetanus.

Once the baby is born, a six-in-one vaccine will be offered to babies at eight, 12 and 16 weeks old.

By three years and four months old, children will be offered a four-in-one pre-school booster, that helps to increase their immunity further.

While the vaccines don’t offer life-long protection against whooping cough, they protect children against the infection when they’re most vulnerable.

Babies and young children are most at-risk of becoming infected with whooping cough. Older children and adults could also become infected, but symptoms tend to be less severe.

Early symptoms of whooping cough are similar to a cold. But, intense coughing bouts start about a week later, the NHS said.

Bouts may last a few minutes, and tend to be worse at night.

Coughing may bring up a thick mucus, and could be followed by vomiting. Patients may gasp for breath between coughs, making a characteristic ‘whoop’ sound.